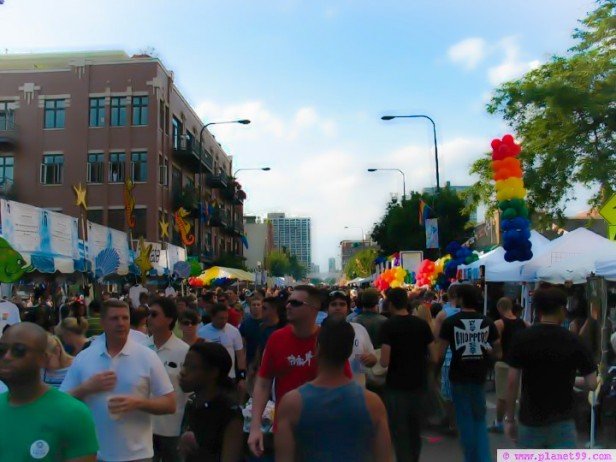 With a few weeks left in the summer neighborhood festival season, one standout neighborhood fest is just days away: Northalsted Market Days.
More than 100,000 people are expected to flock to the two-day fest which is the largest street fest in the Midwest. Located on N. Halsted between Belmont and Addison, this street fest takes place in the heart of Lakeview and Chicago’s Boystown.
Spanning six city blocks, there are over 40 musical acts slated for the weekend along with 400 food, arts and crafts vendors and more.
Headlining musical acts for the weekend include teenage heart-throb Aaron Carter along with David Cassidy, Lynda Carter, Wilson Phillips, 10,000 Maniacs, Andy Bell, Alexis Jordan, and more!
So, whether you’ve ventured into the ‘Market‘ before or are curious to see what it’s all about, here’s a few helpful tips:
It’s not just a ‘gay‘ neighborhood festival. While there may be half-naked men playing Twister in front of a gay bathhouse, you’re just as likely to find a cute family with their kids in a stroller as you are a group of shirtless gay men. It’s a diverse and eclectic neighborhood festival that is as diverse as the Lakeview neighborhood.
Arrive early and beat the crowds. The best way to soak up the experience and see all of the great arts and craft vendors is to arrive early. Crowds start to form close to showtimes and after 2pm in the afternoon. So, if you want to beat the rush, get there early.

Show your support! There is a suggested donation of $8 to enter Market Days and by supporting the fest, you’re supporting Northalsted and all they are doing to support businesses and Chicago’s LGBTQ community. So don’t be a cheapskate, support the community by donating! Speaking of…
Come with plenty of cash. There are plenty of ATMs around the fest but they all come with exorbitant fees, so save yourself a few bucks and come with plenty of cash on-hand. Some vendors will accept plastic, but save yourself some time and hit up the ATM before you arrive.

Sidewalks and alleys are your friend. Crowds of people will undoubtably fill the streets along with tourists and other people who don’t understand the concept of walking, so the fastest way to get around is by walking on sidewalks and alleyways parallel to Halsted. Just be careful walking through the alleyways after dark! 🙂

Get the Pina Colada. Within a few minutes of arriving at Market Days you will undoubtably see people walking around with half of a pineapple flanked with a decorative umbrella and cherries sticking out of it. That would be the signature pina colada that’s synonymous with Market Days. Do yourself a favor and get one. You’ll thank us later.
Stock up! Condoms and lube are handed out at Market Days like candy. Everyone needs to practice safe sex, so why not stock up on the essentials at Market Days? Cargo shorts are definitely a good idea.

Have fun! Whether you’re out and proud or a passionate supporter of the gay community, Market Days is all about having fun. There’s great food, drinks, music, and arts & crafts, and all of the fun that comes from one of Chicago’s best neighborhoods. So, do what you can do to get there and have some fun. It is seriously unlike any other Chicago neighborhood fest you’ve ever been to.