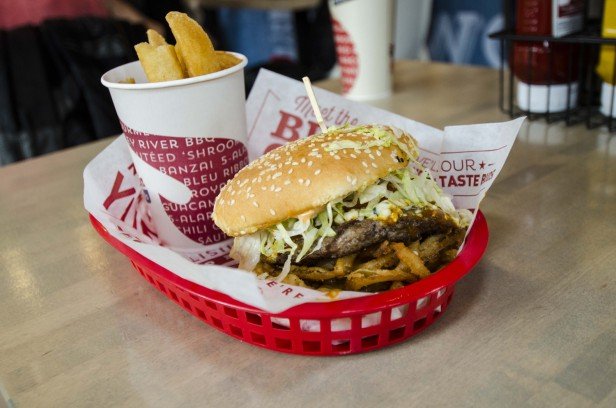 All I wanted was a change. My coworkers and I got that at Red Robin’s Burger Works on 20 E Chicago. Just a block and a half block from PPM’s The Chicagoan at 750 Rush, I’ve passed this Burger Works many times. I figured it was just like the Red Robins I’ve been to in the suburbs, the mainline rock seeping out the front doors, the staff in cardinal red polos, and in many way it was, but I was surprised and pleased at some of the differences.

I don’t eat meat (judge me, if you must), but my coworkers do, and the main concern I had was that there wouldn’t be a cheap, downtown option for someone like me, where I and all my coworkers could go together, eat together. I’d have to go to the same places I’ve been to hundreds of times, suck down another fried fish sandwich. But, again, Burger Works proved me wrong.
I was grateful for it.

Passing the Red Line stop, someone drank from a Starbucks cup, hailed a cab, and we went into Burger Works. Shadows from the collage of American iconography that made up the window cling painted the floor. With my coworkers, Dan and Jasko, both chattering about their diets behind me, sweet, grilled onions and mushrooms were everywhere the air; they crackled on the flattop grill. Silverware somewhere in the back of the kitchen clanged softly like chimes in the summer and the girl behind the counter smiled at us. The whole inside of Burger Works was colorful and clean and the girl’s smile was a fuller, easier smile than I expect at what I thought was just going to be some random fast food joint. I smiled back at her, read the menu over, looked for a decent vegetarian option, found many.

Honestly, it was super easy to do so. I was surprised at how easy it was. I love to be proven wrong and, with every item on the menu, I was able to substitute the meat-based burger with a vegetarian version, while Dan and Jasko ordered their own meals, wandered away laughing about something I didn’t hear, found a table by door.
“Okay, so,” I said, “I can order any burger and substitute for no meat?” “Yes,” she said. I’ve found this to be an uncommon occurrence. My attempts to order meatless items at other fast food places has been met with reactions ranging from the cashier needing to ask for help, to out and out derision.

“Yes,” she said and, again, smiled this very wide smile, her hair in a tight bun under her hat. Pop rock was there, did keep the mood lively, and I barely sat down before our food was brought out to us by same pleasant girl that we’d all ordered from. We talked about how it felt more like a restaurant, ground rock salt and black pepper onto our fries.
We took pictures, ate. And it was good. All of it was really very good. Trying to get opinions out of Dan and Jasko while they were in the middle of eating was not easy. Each of us with crisp, peppered fries that snapped as you bit into them, the best I could wrench from them was an addled chorus of “uh-huhs” and “goods.”

But, I noticed right away that the lettuce on my mushroom burger (on all our burgers, actually) was freshly chopped, the edges clean and crisp. The mushrooms themselves were piled high and were tender, savory. The grilled, golden yellow bun it came on gave the big veggie burger heft and added a buttery twist I didn’t expect.
Onion rings spilled into the basket of Dan’s Blue Ribbon burger there were so many on it. He ate the strays like fries and raved about the tang of the Chipotle mayo mixed with steak sauce. The blue cheese lifted the lid of the bun so high a toothpick had been driven through it to keep it on and Dan said next to nothing the rest of the lunch, ate with abandon. Jasko did too, the Gourmet Cheeseburger he ate built like a classic, save for relish and pickles I could smell from my table. Again, the toothpick barely held his burger together. Bits of cracked wheat dusted the top of the bun. Fresh, bright red tomatoes fell into his basket as he ate.

It was a quiet lunch and, all in all, while Burger Works was a surprise to me at first because of my own, preconceived notions of what a fast-food burger should be, I came away from the place thinking I’d happily go again, happily come with more of my friends, clients.

I’m aware that a burger is too often just a burger, but a place that can offer the kind of change I was hoping for and, not just accommodate, but exceed the expectations of myself, and a group of friends like mine should be made special mention of.

Because, in the end, I really loved what I had, have craved it since. It finally gave me the change I wanted, and the fact that Red Robin’s Burger Works gives me another, better, low-cost option to go to in the Gold Coast for burgers, vegetarian or otherwise, is not something that has gone unnoticed. I’d encourage you not to ignore it either and just give it a try. Oh and don’t forget to checkout our latest blog on the new Ferris Wheel at Navy Pier!