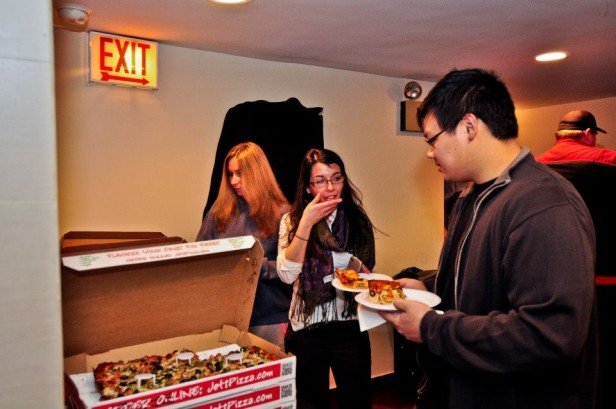 In case you didn’t hear, there’s a new deep-dish pizza in town. And no, it’s not another pizza joint claiming to be the best Chicago deep-dish. To the thrill of Michiganders residing in Chicago, Michigan’s famous deep-dish pizza, Jet’s, has taken up residence in Chicago on the border of Lincoln Park/Lakeview/Roscoe Village at Ashland & Diversey.
While we will always remain true to the ooey-gooey goodness of a Chicago deep-dish, we decided to give Jet’s Pizza a try. With all of the hoopla from our Michigan residents, we decided it was worth reviewing.
Jet’s Pizza is the seventeenth largest pizza chain in the nation, by sales (PMQ, 2010), with over 200 locations and plans for rapid future growth.
Eugene Jetts and his brother John Jetts opened the first Jet’s Pizza in 1978 in Sterling Heights, Michigan. Fourteen years later, after opening and operating several successful “Jet’s Pizza” stores, a corporation called Jet’s America was formed with business partners Jim Galloway, Jr. and Jeff Galloway.

“There are a lot of ways out there to make cheaper pizza. Jet’s is about better pizza. That’s why we have never skimped on the product or the ingredients, and never will,” says Eugene Jetts. “As soon as people get a slice of Jet’s Pizza into their mouth they notice something different,” he adds. “They notice it’s better.”
In a word, Jet’s Pizza is rather… SQUARE.

While Chicago style deep-dish is only able to be eaten with a knife and fork, comes in a round pan and is cut in triangular slices, Jet’s Pizza deep-dish is cooked in rectangular shaped pan and is cut in square slices. And, while Chicago style deep-dish is build in reverse, with the sauce on top and cheese and toppings below, Jet’s Pizza is made like traditional pizza with sauce at the base, cheese, and then the toppings where they “belong”… on top. Jet’s also gives you interesting options for your crust. You can get a traditional butter crust or other options including: parmesan, poppy seed, garlic, sesame seed, Cajun, or Romano. Each option offers a unique compliment to the wide selection of toppings available.
In addition to pizza, Jet’s also offers great starters like wings [on the bone or boneless] and Jet’s bread, their version of breadsticks that come with toppings like bacon, pepperoni, or cheese. They also have sandwiches and salads on their menu for those who are weary of cheating on Chicago deep-dish.
Our Restaurant Reviewers decided to throw a pizza party at 450 W Melrose to check out Jet’s and show some love to our residents.
We’ll start off by saying that every resident from Michigan freaked out seeing that Jet’s had opened in Chicago. They excitement made us eager to give this square deep-dish a try.

For all of us, it was love at first bite. The butter crust was airy and delicious and there was just the right amount of sauce, cheese and toppings. The square-cut slices were the perfect size and we could eat the pizza without a knife or fork! While you still got the ooey goodness you’d expect from deep-dish, you  get it without the heaviness that comes with Chicago-style pizza.

The square pans and slices also ensure that the edges of the pizza and crust are perfect crisp and chewy — it’s divine!
We tried a variety of pizza options from Jet’s — the traditional pepperoni and one with sausage and we also tried a couple of their speciality pizzas including the veggie and BBQ chicken. All were crowd pleasers and we couldn’t pick which we liked best. Everyone was unanimous, though, on this welcome addition to deep-dish pizza available in Chicago!

Pizza should be fun,” says John Jetts. “If you’re eating one of our pizzas and you don’t have a smile on your face, then something is wrong.” That fun attitude can be summed up in the company’s simple slogan, says Jetts, “Life is short. Eat better pizza.”
All of our Restaurant Reviewers and residents were smiling after trying Jet’s Pizza, so it’s safe to say that their mission was accomplished with us.

Jet’s is currently located at 2811 N Ashland with additional Chicago locations set to open soon. Visit their website for details.