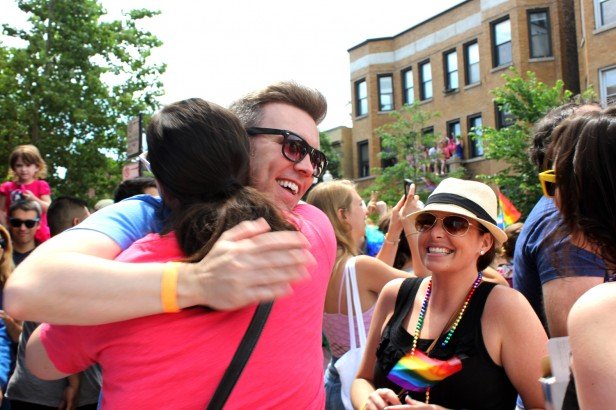 Lesbian, Gay, Bisexual and Transgender Pride Month (LGBT Pride Month or Gay Pride Month) is celebrated each year in the month of June to honor the 1969 Stonewall riots in Manhattan. The Stonewall riots were a series of spontaneous, violent demonstrations by members of the gay community against a police raid that took place in the early morning hours of June 28, 1969, at the Stonewall Inn, located in the Greenwich Village neighborhood of Manhattan. They are widely considered to constitute the single most important event leading to the gay liberation movement and the modern fight for LGBT rights in the United States. In the United States the last Sunday in June was initially celebrated as “Gay Pride Day,” but the actual day was flexible. In major cities across the nation the “day” soon grew to encompass a month-long series of events. Today, celebrations include pride parades, picnics, parties, workshops, symposia and concerts, and LGBT Pride Month events attract millions of participants around the world. Memorials are held during this month for those members of the community who have been lost to hate crimes or HIV/AIDS. The purpose of the commemorative month is to recognize the impact that lesbian, gay, bisexual and transgender individuals have had on history locally, nationally, and internationally.

Few cities have a greater variety of Pride-related gay events going on during the month of June than Chicago, whose Gay Pride Month includes sporting events, food tastings, parades, plays, musical performances, parties, queer youth gatherings, and ceremonies of all kinds. Chicago’s most significant Pride events take place primarily in late June, with Chicago PrideFest taking place June 20 and June 21, 2015, a week before the Chicago Pride Parade, held June 28. PrideFest is sponsored by the North Halsted Business Alliance. The schedule of events is found on their page at www.northalsted.com/pages/chicago_pride_fest__2015/147.php.

The Chicago Pride Festival is a great place to meet local merchants and learn about area GLBT organization. It takes place this year the weekend before the parade, on Saturday, June 20, and on Sunday, June 21, in the heart of Boystown. The festivities are staged along North Halsted Street between Addison and Grace, and live entertainment last year included such top acts as Jennifer Hudson, Mya, Thelma Houston, Alex Newell, and many others.

Chicago Pride’s most famous event is its Annual Pride Parade, a colorful and celebratory procession that begins at noon on Sunday, June 28. The parade begins at the corner of Broadway and Montrose, and continues south on Broadway, then south on Halsted, east on Belmont, south again on Broadway, and east on Diversey to Cannon Drive.

A partial listing of Pride Month events can be found on the ChicagoPride.com website at chicago.gopride.com/calendar/group.cfm?scode=15_PRIDE_CHI.

Many Planned Property Management buildings are situated in Lakeview, close to LBGT Pride Month activities and the Annual Pride Parade that takes place on June 28. Great strides have been made in gaining acceptance and equal right for the LBGT community and the parade now celebrates progress as much as past struggles. Later, in August, The 34th Annual Northhalsted Market Days is held on the weekend of August 8 and 9. This is one of the best street festivals in all of Chicago and worth checking out for it’s amazing musical lineup and vendors. Bring your sunscreen!