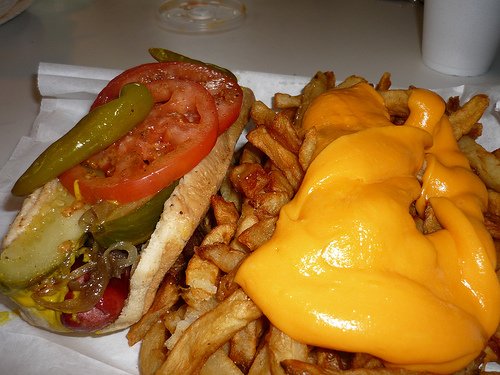 I’ve been in a Dog Fight before, I know how to handle myself.  My last Fight brought me to Lakeview, this one to Lincoln Park.  I ventured to America’s Dog, Wiener Circle, and Chicagos Dog House, three of Lincoln Park’s top-rated hot dog stands, to see which establishment was tops.
The first stop on my venture was America’s Dog @ 2300 North Lincoln Ave.  America’s offered many dog options, all of which named after U.S. cities.  The formula for the city dogs was consistent – a beef frank topped with condiments specific to said city.  I found this intriguing…so I had two.  My first was a Baltimore deep fried (don’t judge) with cheddar and grilled onions.  I am sad to say that I couldn’t taste the deep-friedness.  My second dog, the Chicago classic, was average.  But.  I will still go back to America’s Dog.  I love a good gimmick; they have 19 other city dogs to try.

My next stop brought me to the Wiener Circle @ 2622 N Clark.  The food at the Circle was standard Chicago and very comparable to Wrigleyville Dog (reviewed in the Lakeview Dog Fight)  I even had the same meal as at Wrigleyville, a Chicago-style with cheese fry.  But what set the Circle apart was the option of getting the dogs “charred”.  Most Chicago dog joints steam their hot dogs, whereas the Wiener Circle “Char Dog” is grilled crispy on the outside and juicy on the inside.  It was great.  But word to the wise, don’t make the mistake I did and order grilled onions on your hot dog.  They made the bun too soggy, and I had to pick them off.
The final establishment on my itinerary was Chicagos Dog House @ 816 W Fullerton.  Chicagos offered off-the-wall sausage options (similar to Franks ‘N’ Dawgs reviewed in my failed Lincoln Park Dog Fight attempt) such as alligator and

duck – most definitely a perk.  Another perk of Chicagos Dog House was the option of making your dog a turkey or veggie dog for no extra charge.  I chose to stick to an all-beef frank, but with a hellaciously amazing combination of toppings, including giardiniera, bacon, onions, cheddar, and bbq sauce.  The sandwich, aptly named the Midway Monster, was not only scrumptious, but a steal @ $2.99.  It was definitely my favorite sandwich of the Fight.
All-in-all, my Lincoln Park Dog Fight proved notably different from the Lakeview excursion.  The dog joints in Lakeview were high quality, yet Chicago standard.    The joints in Lincoln Park’s proved more willing to branch out and put spin on a classic take.  And even though I found my favorite (in Chicagos Dog House), I’d be happy to hit up any of the three establishments featured in the LP Fight next time I’m in the mood for a hot dog, or two, or three.  But no matter what…here at PPM Chicago Apartments…the talking wiener still reigns supreme.