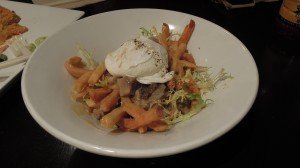 The plan was to have a Dog Fight in Lincoln Park.  The Dog Fight in Lakeview went pretty well.  And besides, with a multitude of dog joints in Planned Property neighborhoods, it can be really tough to figure out which is the best.  There’s roughly 10 dog joints in Lincoln Park alone, so, I picked a few to see which dog is the hottest.  Only, there was a problem.  When I got to the first stop on my itinerary, Franks n’ Dawgs at 1863 N. Clybourn, I realized that the dog fight had to be put on pause.  The reason why is that, to my surprise, Franks n’ Dawgs was more than just a dog joint.

In fact, so much more that the name is slightly misleading; they do have hot dogs, but many of their creative flavor combinations (they call them “dawgs”) are like no other on a bun.   The menu includes things like the Truffle Mac n’ Cheese Dawg, the Chinatown Duck Dawg with pickled lotus roots, and a Brunch Dawg with pork loin sausage, fried egg and bacon.  They call themselves “5-star dining on a bun”, and I ordered not one, but two meals to put that to the test.  And I have to say, everything I ordered really was top notch.  On the right is the the Smokin’ Trout Dawg with fried green tomatoes and below is the Sweet Veal Dawg with lyonnaise fries.