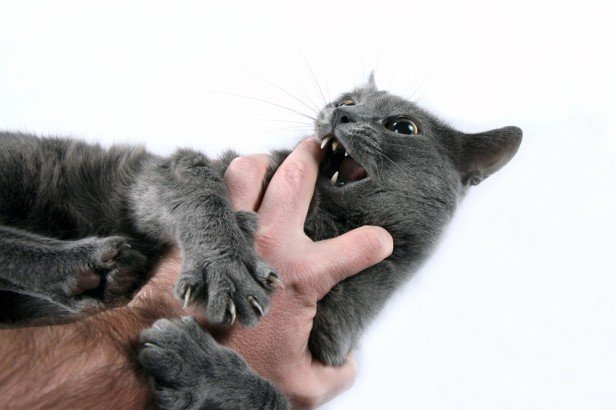 Hello Planned Property Management residents! Did you know that ALL PPM buildings are cat-friendly? Whether you’re a current cat owner hoping to adopt another cat or pet-free and looking to adopt a pair of sibling kittens or whatnot, aggression between cats is one of the chief concerns of cat owners.
The ASPCA defines feline aggression as, “threatening or harmful behavior directed toward another individual.” The type of aggression a cat will display against another household cat is referred to as “Inter-Cat Aggression” a sub-classification of “Territorial Aggression”. Inter-cat aggression can also be related to physical size and activity (e.g., large cats intimidating smaller cats), previous bad interactions with other cats, or to a simple personality clash. Sometimes inter-cat aggression can even occur between cats whom have been in the same household for years if one cat goes away for one reason or another (e.g., hospital visit) and returns to the household. However, a cat who suddenly develops aggression towards his housemate, as with any change in behavior, this might be indicative of a medical condition, rather than purely a social dysfunction. For example, cats who develop thyroid problems often become aggressive and pain can also cause aggression. If aggression arises out-of-the-blue, having a thorough medical check-up may be necessary.

Aggression between household cats can be complicated and thus some cat parents won’t be able to pick up on some of the complexities of the cat relationship dysfunctions. Most discernable is when the aggressor cat will posture, and the recipient cat will make themselves smaller and/or run away or when the aggressor cat swats, chases, and/or attacks the other cat. Cat body language is more subtle and can be harder for owners to interpret. The ASPCA identifies 3 types of body postures of cat aggression:

• A stiff, straight-legged upright stance
• Stiffened rear legs, with the rear end raised and the back sloped downward toward the head
• Tail is stiff and lowered or held straight down to the ground
• Direct stare
• Upright ears, with the backs rotated slightly forward
• Piloerection (hackles up), including fur on the tail
• Constricted pupils
• Directly facing the other cat, possibly moving toward him
• Growling, howling or yowling

• Crouching
• Head tucked in
• Tail curved around the body and tucked in
• Eyes wide open with pupils partially or fully dilated
• Ears flattened sideways or backward on the head
• Piloerection (hackles up)
• Whiskers might be retracted
• Turning sideways to the opponent, not straight on
• Open-mouthed hissing or spitting
• Might deliver quick strikes with front paws, claws out

Overt aggression (defensive or offensive)

• Swatting, striking with paws
• Biting
• Fighting
• Growling/shrieking
• Scratching
• Preparing for an attack by rolling onto side or back and exposing teeth and claws
Depending upon the situation causing the inter-cat aggression in your home, animal behavior experts advise thusly:

• Separation – Place your cats in different rooms of your apartment for anywhere from several days to weeks. Do not allow them to paw at or smell each other through a door. Provide them with separate beds, bowls and litter boxes.
• As time progresses and aggression dissipates, place the cats’ food bowls on opposite sides of a closed door.
• Each day, switch the rooms/areas your cats are in so that they both experience some variation and get access to each other’s scents.
• After several days, if both of cats appear relaxed, crack the door about one inch. If they remain calm, open the door a bit more, then a bit more. If your cats remain relaxed, they may be ready to be together again.
• Have regular interaction with the cats (playing and/or petting) during the separation period.
• It is VERY important to that you are providing each cat with enough exercise and playful interaction.
• Many times inter-cat aggression happens as a result of when one cat wants to play and the other cat doesn’t. Providing the more playful cat with enough exercise might be able to eliminate the problem.
For Cats Who Have Never Gotten Along:
• Separation – separate your cats as described above but for a longer period of time, and reintroduce them at a much slower pace
o Instead of opening the door to reintroduce the cats, provide daily reintroduction sessions that very gradually move the cats closer and closer together.
• For particularly bad cases, consider controlling your cats with harnesses and leashes, or by confining one or both of your cats in a crate(s).
• Keep both cats distracted with food or play. Start out with them far apart. Keep the sessions short.
• Only when your cats can peacefully eat and play within a couple feet of each other should they be left alone together unsupervised.

Anti-anxiety medication may be helpful in reducing an aggressor cat’s actions and anti-anxiety or anti-depressants may alleviate a panicky cat’s fear
For Introducing a New Cat into the Home:

Reduce competition between the cats by providing multiple, identical food bowls, beds, and litter boxes in different areas of your apartment.

Provide additional perches and scratching posts and toys. By having more perches, this will provide your cats with more options for alone/chill out time.

Reward desired behavior. Depending on if your cat is praise/pet motivated or food motivated, praise or toss treats to reward your cats when you see them interacting in a friendly manner.
Despite your best efforts sometimes your cats won’t ever reach BFF status. Just like with people having roommates (ah dorm days), sometimes it is simply a personality clash with cats and they’ll never get along. While they might not ever be BFFs, it IS possible for harmonious living. If these techniques don’t work, it would be advantageous to consult your vet. Your vet might provide you with numbers to an applied animal behaviorist, a certified applied animal behaviorists, an associate certified applied animal behaviorist, or a veterinary behaviorist. If you want to jump start your search, below are links for professionals in your area:
www.certifiedanimalbehaviorist.com
www.dacvb.org